Pain level 2 has been categorized according to a variety of wasps, bees, and ants into Pain Level 2, including yellowjackets, the Asiatic honey bee, the trap-jaw ant, and the bald-faced hornet. The duration of the stings in this level is generally between five and ten minutes long.

The western honey bee or European honey bee is the most common of the 7–12 species of honey bees worldwide.

Like all honey bee species, the western honey bee is eusocial, creating colonies with a single fertile female (or "queen"), many normally non-reproductive females or "workers", and a small proportion of fertile males or "drones". Individual colonies can house tens of thousands of bees. Colony activities are organized by complex communication between individuals, through both pheromones and the dance language.

Yellowjacket or yellow jacket is the common name in North America for predatory social wasps.  Most of these are black and yellow like the eastern yellowjacket some are black and white like the bald-faced hornet.  Others may have the abdomen background color red instead of black. They can be identified by their distinctive markings, their occurrence only in colonies, and a characteristic, rapid, side-to-side flight pattern prior to landing. All females are capable of stinging. Yellowjackets are important predators of pest insects.

Trap-Jaw Ants have a pair of large, straight mandibles capable of opening 180 degrees. These jaws are locked in place by an internal mechanism, and can snap shut on prey or objects when sensory hairs on the inside of the mandibles are touched. The mandibles are powerful and fast, giving the ant its common name. The mandibles either kill or maim the prey, allowing the ant to bring it back to the nest. The trap- jaw ant can simply lock and snap its jaws again if one bite is not enough, or to cut off bits of larger food. The mandibles also permit slow and fine movements for other tasks such as nest building and care of larvae. The ants were also observed to use their jaws as a catapult to eject intruders or fling themselves backwards to escape a threat.

The bald-faced hornet gets its name from the characteristic white markings on its face, This species is a yellowjacket wasp, not a true hornet. Colonies contain 400 to 700 workers, the largest recorded colony size in its genus. It builds a characteristic large hanging paper nest up to (23 in) in length. Workers aggressively defend their nest by repeatedly stinging invaders. 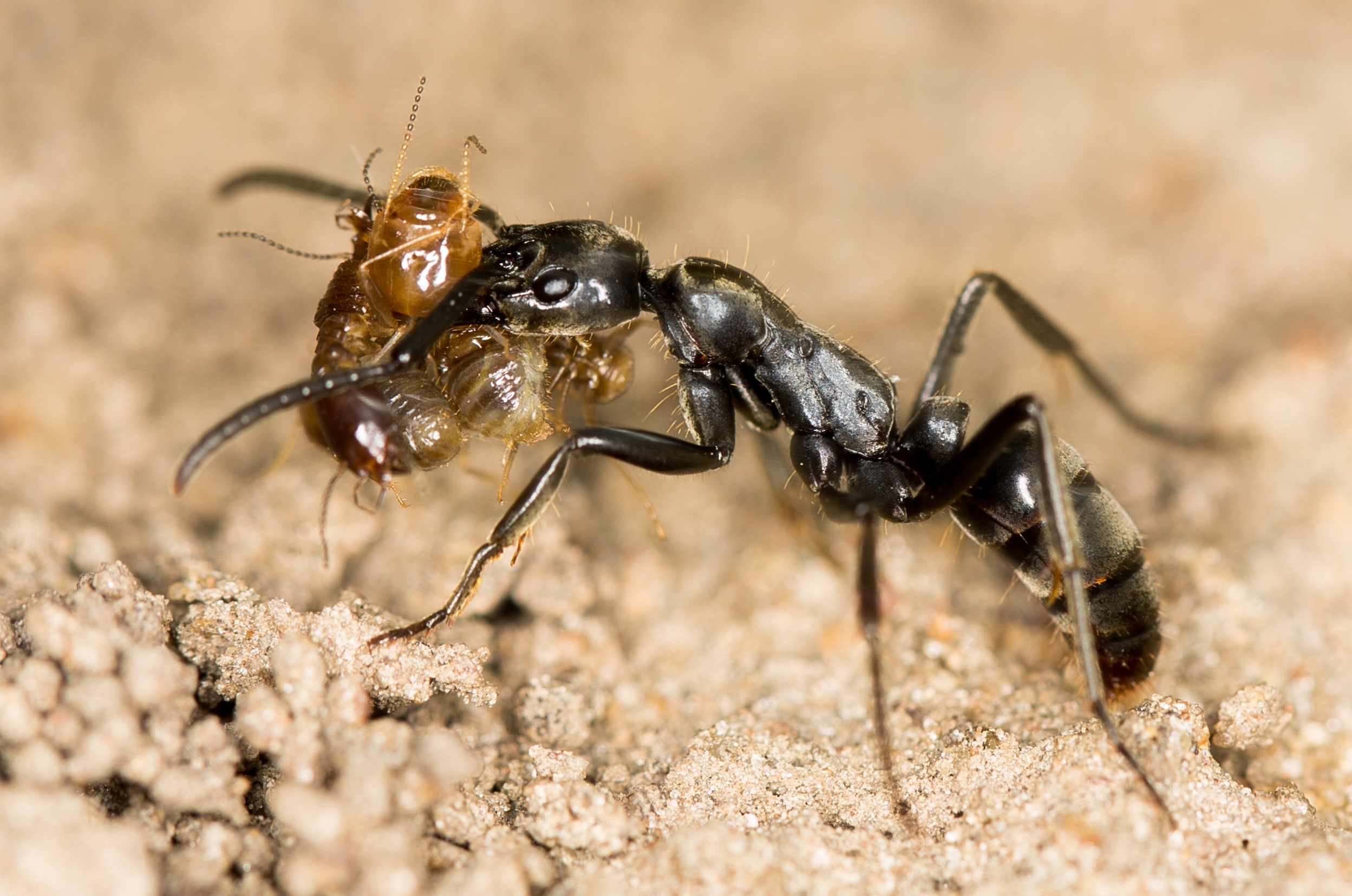 The sting of a Termite-Raiding Ant, categorized as a pain level of 2, has a similar feeling as "the debilitating pain of a migraine contained in the tip of your finger".  On the contrary, a yellowjacket's sting was described as being "hot and smoky, similar to the feeling you would experience if you extinguished  a cigar on your tongue."  They are a strictly termite-eating ant species widely distributed in Sub-Saharan Africa and most commonly known for their column-like raiding formation when attacking termite feeding sites.